I remember the first time I became aware of the larger world.  I was five, and until that point everything that mattered was contained in my family.  My universe consisted of our house, a few adjoining backyards, our church (always the damn church), and that satellite known as “grandma’s house.”  I was blissfully ignorant of almost everything that engages the attention of everyone else on the planet.

Then something happened that took me out of my personal solar system.  I learned about it when my father came home that July afternoon.  I was playing on the front steps, and he pulled into our driveway in his baby blue Plymouth Duster.  He seemed to almost hop as he came around the car, strode the sidewalk briskly toward me, and then swooped down to pick me up.  He didn’t just bring me chest high to hug me.  Instead, he lifted me straight up in the air as high as his arms could reach.

“Baby,” he said, his excitement evident and barely contained.  “Today a man walked on the moon.”

My father wasn’t the only one excited.  This event captured the imagination of the world.  It was a restless time on this planet with the Vietnam War erupting abroad and disgruntled people finding their voices at home.  All of that seemed to stop as the world breathlessly awaited those assuring words, “Houston, Tranquility Base here.  The Eagle has landed.”  It was July 20, 1969, and the jury was still out on whether humanity would choose the way of war or the way of peaceful exploration as the foundation for our collective future.

Those three men came home — Neil Armstrong, Edwin “Buzz” Aldrin, and Michael Collins.  My father and I watched the splashdown on our black-and-white television.  I still find it amazing that three astronauts who had been to the moon would end their journey with the NASA equivalent of water wings. 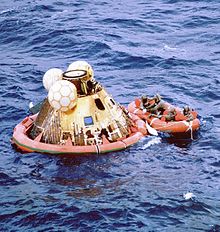 After Apollo 11, five more missions went to the moon.  The last was Apollo 17 in December 1972.  It was that mission that gave us the famous picture of the earth from the moon known as “The Blue Marble.”

Our planet looks serene and cool from the perspective of the moon.  The red hot flames of war are not seen, only the swirl of clouds, the vast blue of the oceans, and the outline of the continents.  But, since Vietnam, we have been in war more than we’ve been out of it, it seems.  I guess we know which decision America made.

But it also says something about us that the “Blue Marble” picture has been reprinted so many times and is now so familiar to so many.  I think it’s how we want to see our world, a place where war and national boundaries and economies and strife are too small to be seen with the naked eye and too insignificant to matter in the big picture.

This site uses Akismet to reduce spam. Learn how your comment data is processed.

Woodwinding while Black.
How My Brain Works: Every time I see this sign in the restroom at work, I’m silently singing “Stop germs, wash your hands, everybody look what’s going down.”
Take care o’ yo’self.
A last lunch with some of my favorite people before Nickie and I head to the airport.
My sister was my first best friend, and that hasn’t changed. We moved all over growing up and faced many new experiences together, but something about being in Denver with @dalindad always feels a little like coming home. She’s my big sister, and one of two people on the planet who have known me every minute of my life. I love you, seester.